The fundamental operation of an RF front end is fairly straightforward: it detects and processes radio waves that have been transmitted with a specific known frequency or range of frequencies and known modulation format. The modulation carries the information of interest, be it voice, audio, data, or video.

The receiver must be tuned to resonate with the transmitted frequency or frequencies in order to detect them. Those received signals are then filtered from all surrounding signals and noise and amplified prior to a process known as demodulation, which removes the desired information from the radio waves that carried it.

These three steps—filtering, amplification and demodulation—detail the overall process. But actual implementation of this process (i.e., designing the physical RF receiver printed-circuit board (PCB)) depends upon the type, complexity, and quantity of the data being transmitted. For example, designing an RF front end to handle a simple amplitude-modulated (AM) signal requires far less effort and hardware (and even software) than building an RF front end for the latest third-generation (3G) mobile telecommunications handset.

Because of the enhanced performance of analog components due to IC process improvements and decreasing costs of more powerful digital-signal-processing (DSP) hardware and software functions, the ways that different RF front-end architectures are realized has changed over the years. Still, the basic requirements for an RF front end, such as the frequency range and type of carrier to be received, the RF link budget, and the power, performance, and size restrictions of the front-end design, remain relatively the same in spite of the differences in radio architectures.

Let’s start by looking at the simplest of radio architectures or implementations.

AM Detector Receivers
One of the basic RF receiver architectures for detecting a modulated signal is the amplitude modulation (AM) detector receiver (see Fig. 8-2). The name comes from the fact that information like speech and music could be converted into amplitude (voltage) modulated signals riding on a carrier wave. Such an RF signal could be de-modulated at the receiving end by means of a simplediode detector. All that is needed for a basic AM receiver—like a simple crystal radio—is an antenna, RF filter, detector, and (optional) amplifier to boost the recovered information to a level suitable for a listening device, such as a speaker or headphones.

The antenna, which is capacitive at the low frequencies used for AM broadcasting, is series matched with an inductor to maximize current through both, thus maximizing the voltage across the secondary coil. A variable capacitance filter may be used to select the designed frequency band (or channel) and to block any unwanted signals, such as noise. The filtered signal is then converted to demodulate the AM signal and recover the information. Fig. 8-3 represents a schematic version of the block diagram shown in Fig. 8-2. 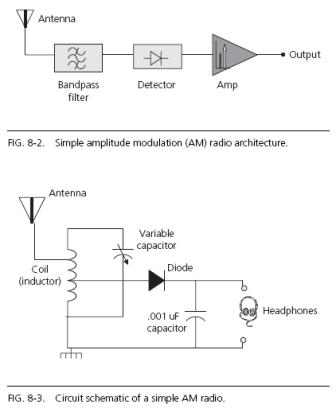 The heart of the AM architecture is the detector demodulator. In early crystal radios, the detector was simply a fine metal wire that contacted a crystal of galena (lead sulfide), thus creating a point contact rectifier or “crystal detector.” In these early designs, the fine metal contact was often referred to as a “catwhisker.” Although point-contact diodes are still in use today in communication receivers and radar, most have been replaced by pn-junction diodes, which are more reliable and easier to manufacture.

A shunt inductor is typically placed in front of the detector to serve as an RF choke. The inductor maintains the input to the detector diode at DC ground while preserving a high impedance in parallel with the diode, thus maintaining the RF performance.

In a simple detector receiver, the AM carrier wave excites a resonance in the inductor/tuned capacitor (LC) tank subcircuit. The tank acts like a local oscillator (LO) to the current through the diode is proportional to the amplitude of the resonance and this gives the baseband signal (typically analog audio).

The baseband signal may be in either analog or digital format, depending upon the original format of the information used to modulate the AM carrier.As we shall see, this process of translating a signal down or up to the baseband level becomes a critical technique in most modern radios. The exception is time domain or pulse position modulation. Interestingly, this scheme dates back to the earliest (spark gap) radio transmitters. It’s strange how history repeats itself. Another example is that the earliest radios were digital (Morse code), than analog was considered superior (analog voice transmission), now digital is back!

The final stage of a typical AM detector system is the amplifier, which is needed to provide adequate drive levels for an audio listening device, such as a headset or speaker. One of the disadvantages of the signal diode detector is its poor power transfer efficiency. But to understand this deficiency, you must first understand the limitation of the AM design that uses a halfwave rectifier at the receiver. At transmission from the source, the AM signal modulation process generates two copies of the information (voice or music) plus the carrier. For example, consider an AM radio station that broadcasts at a carrier frequency of 900 kHz. The transmission might be modulated by a 1000-Hz (1-kHz) signal or tone. The RF front end in an AM radio receiver will pick up the 900-kHz carrier signal along with the 1-kHz plus and minus modulation around the carrier, at frequencies of 901 and 899 kHz, respectively (see Fig. 8-5). The modulation frequencies are also known as the upper and lower sideband frequencies, respectively. 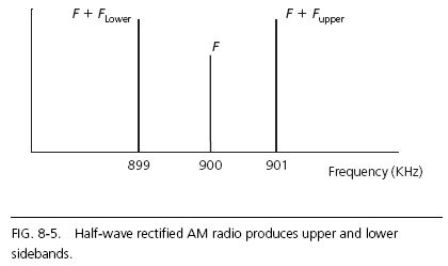 But only one of the sidebands is needed to completely demodulate the received signal. The other sideband contains duplicate information. Thus, the disadvantages of AM transmissions are twofold: (1) for a given information bandwidth, twice that bandwidth is needed to convey the information, and (2) the power used to transmit the unused sideband is wasted (typically, up to 50% of the total transmitted power).

Naturally, there are other ways to demodulate detector-based receiver architectures. We have just covered an approach used in popular AM receivers. Replacing the diode detector with another detector type would allow us to detect frequency-modulated (FM) or phase-modulated (PM) signals, this latter modulation commonly used in transmitting digital data. For example, many modern telecommunication receivers rely heavily on phaseshift keying (PSK), a form of phase (angle) modulation. The phrase “shift keying” is an older expression (from the Morse code era) for “digital.”

All detector circuits are limited in their capability to differentiate between adjacent signal bands or channels. This capability is a measure of the selectivity of the receiver and is a function of the input RF filter to screen out unwanted signals and to pass (select) only the desired signals. Selectivity is related to the quality factor or Q of the RF filter. A high Q means that the circuit provides sharp filtering and good differentiation between channels—a must for modern communication systems.

Unfortunately, tuning the center carrier frequency of the filter across a large bandwidth while maintaining a high differentiation between adjacent channels is very difficult at the higher frequencies found in today’s mobile devices. Selectivity across a large bandwidth is complicated by a receiver’s sensitivity requirement, or the need to need to detect very small signals in the presence of system noise—noise that comes from the earth (thermal noise), not just the receiver system itself. The sensitivity of receiving systems is defined as the smallest signal that leads to an acceptable signal-to-noise ratio (SNR).