The mixer generates intermediate freqeuency (IF) signals that result from the sum and difference of the LO and RF signals combined in the mixer:

These sum and difference signals at the IF port are of equal amplitude, but generally only the difference signal is desired for processing and demodulation so the sum frequency (also known as the image signal: see Fig. 8-11) must be removed, typically by means of IF bandpass or lowpass filtering. 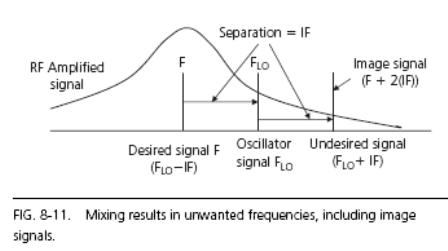 A secondary IF signal, which can be called f*IF, is also produced at the IF port as a result of the sum frequency reflecting back into the mixer and combining with the second harmonic of the LO signal.

Mathematically, this secondary signal appears as:

This secondary IF signal is at the same frequency as the primary IF signal. Unfortunately, differences in phase between the two signals typically result in uneven mixer conversion-loss response. But flat IF response can be achieved by maintaining constant impedance between the IF port and following component load (IF filter and amplifier) so that the sum frequency signals are prevented from re-entering the mixer. In terms of discrete components, some manufacturers offer constant-impedance IF bandpass filters that serve to minimize the disruptive reflection of these secondary IF signals. Such filters attenuate the unwanted sum frequency signals by absorption. Essentially, the return loss of the filter determines the level of the sum frequency signal that is reflected back into the mixer.

If a mixer’s IF port is terminated with a conventional IF filter, such as a bandpass or lowpass type, the sum frequency signal will re-enter the mixer and generate intermodulation distortion. One of the main intermodulation products of concern is the two-tone, third-order product, which is separated from the IF by the same frequency spacing as the RF signal. These intermodulation frequencies are a result of the mixing of spurious and harmonic responses from the LO and the input RF signals:

But by careful impedance matching of the IF filter to the mixer’s IF port, the effects of the sum frequency products and their intermodulation distortion can be minimized. 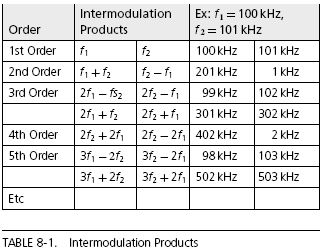 These odd order intermodulation products are of interest in the first mixer state of a superheterodyne receiver. As we have seen earlier, the very function of a mixer stage—namely, forming an intermediate lower frequency from the sum/difference of the input signal and a local oscillatory—results in the production of nonlinearity. Not surprisingly, the mixer stage is a primary source of unwanted intermodulation products. Consider this example: A receiver is tuned to a signal on 1000 kHz but there are also two strong signals, f1on 1020 kHz and f2 on 1040 kHz. The closest signal is only 20 kHz away. 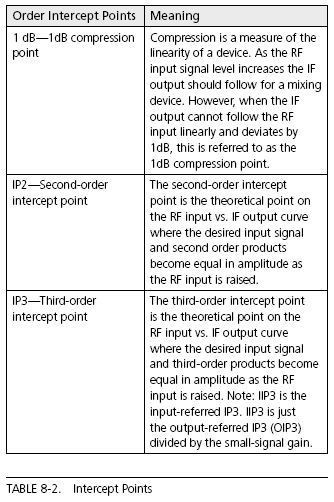